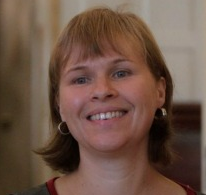 Kathy has been the director of Companion House for the last fifteen years.

Companion House is a community-based NGO, part of a country-wide network of organisations working for survivors of torture and trauma. Services (which are free) continue to expand, from medical and counselling care to children’s early intervention counselling, community development, transitional housing and migration advice.

Companion House was established in the late 1980s by activists from Amnesty International. South American refugees were the first wave of clients. The organisation is largely government funded, though donations of private money have gone up in the last 5 years. Over the past year and a half, Companion House has seen about 1200 people across all programs.

Clients have come from Iraq, Burma, Africa, Sri Lanka, and Iran. Rohingya refugees from Burma are a large group.

Refugees from some geographic areas tend to arrive in reasonably intact family groups and do better than those who arrive on their own; ethnic enclaves here in Canberra are very protective and functional, such as the Mon, with “village” solidarity. On the asylum seeker side, there are many more men, such as Hazara and Rohingyas, who are more vulnerable in their own countries. These language communities suffer from the gender imbalance and life is more of a struggle.

Kathy stressed that work rights are essential in providing dignity to people’s lives; health problems decreased rapidly when people who had arrived by boat, and had no right to work, were finally allowed to get a job.

Housing is a great source of stress. In Canberra there is a 6-month wait before eligibility for public housing.

Torture aims to humiliate and it does this effectively. Some cultures are more easily able to talk about what has happened than others. Companion House does not ask, but makes a safe space for people and waits to be told. A lot of Sri Lankans are survivors of torture. Ageing triggers problems for people who have managed to put memories behind them, as older memories survive and more recent ones fade.

Kathy noted how some people complain that refugees take advantage of our kindness by making up stories; she told a story about an asylum seeker whose application for refugee status was unsuccessful because he was simply unable to reveal how he had been sexually tortured.

What can we do? We can build welcoming communities for refugees.

– refugees make up a tiny proportion of the people who arrive in Australia each year to stay. Our humanitarian intake for 2015-16 was 13,750 (plus 12,000 special places for people fleeing war in Syria, mostly Iraqis it is thought, of whom by mid-May this year fewer than 30 had been resettled in the community), while at the same time we are welcoming about 300,000 immigrants each year.

– it’s a happy story really: families arrive and settle and do well, in general.