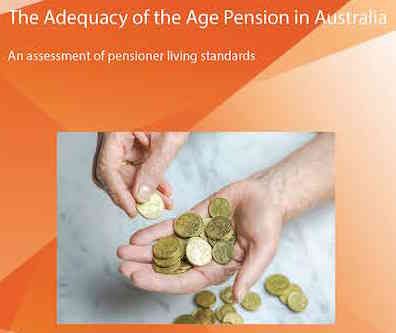 This week has seen a new report bursting onto the television screen: “The Adequacy of the Age Pension“.

A National Press Club audience in Canberra heard some hard facts about the inadequacy of the age pension. (See the presentation here, or on the ABC’s iview till the 28th September.)

The Age Pension in Australia (base rate $794 per fortnight) fails to provide a decent standard of living for approximately 1.5 million people who rely on it as their main source of income. One third of aged pensioners live at, or below, the poverty line ($851 per fortnight).

Those at particular risk are renters and single women with low superannuation. People have thought up extreme ways of managing. Some people are disconnecting their hot water for six months of the year; others are avoiding medical care when it comes to specialist appointments or dentistry. There is simply no money for that kind of expense in the fortnightly pension, and the alternative might be not eating an evening meal. One woman had not had a holiday in thirty years.

The three Press Club speakers are co-authors of the report: Everald Compton, chairman of the Longevity Innovation Hub; David Hetherington, executive director of the Per Capita think tank; and Jo Toohey, CEO of the Benevolent Society, a 200-year-old Australian charity.

The report recommends measures to address this serious problem, including:

Jo Toohey is calling for a “courageous national conversation” on the age pension. Nothing will happen at the political level unless the community as a whole begins to talk about our need for a fair and equitable age pension.