Students wagged school and gathered in Garema Place on Friday 15 March 2019 as part of the Global Climate Strike. They called for 100% renewable energy by 2030. 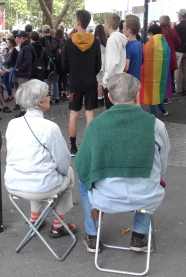 “We’ll stop acting like adults if you stop acting like children!” they said. Organisers estimated that 3500 people attended the rally, including 2000 school students. Some parents and grandparents, including a sprinkling of Vintage Reds, also came and were vastly impressed by the students’ organisation and mature activism.

UnionsACT secretary, Alex White, says: “Unions in Canberra support the student climate strike and congratulate them for taking action to send the message that climate change is the greatest threat to future generations. Tackling climate change & ensuring a Just Transition* is core union business. There are no jobs on a dead planet.”