Jane introduced our speaker, Dr Meredith Burgmann, an academic, unionist and feminist, who spoke about the Springbok rugby tour of Australia in 1971. The 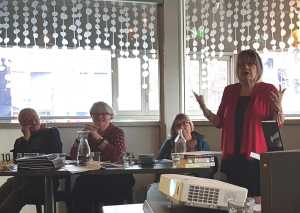 talk focused on the tour in the context of sporting boycotts in Australia and globally.

Meredith gave an acknowledgement of country and paid her respects to elders.

We were happy to have in the audience veterans of the anti-apartheid movement as well as other contemporary actions such as the BLF’s Green Bans.

The South African Nationalist party adopted apartheid in its successful election campaign in 1948. Post-war Australia was an extremely conservative place, and the common line was that white South Africans were some kind of necessary bulwark against communism. In those days the Australian parliament didn’t discuss foreign affairs much. Meredith found only Gough Whitlam and Barry Cohen to be exceptions to this rule.

In the union movement, the seamen and waterside workers traditionally had international connections, of course. During this period they boycotted South African ships and refused to load cargos.

The first anti-apartheid group in Australia was the South Africa Defence and Aid Fund, a lawyers’ group (see John Myrtle’s essay at honesthistory.net.au). Students also demonstrated sporadically against South African apartheid. The rise of the New Left and student activism, during the Vietnam war, led to involvement in other issues including apartheid.

Sydney’s Stop the Tours campaign began in 1969: Denis Freney, Meredith, and Peter MacGregor were all involved. Sekai Holland was another member (a Zimbabwean who later returned to Zimbabwe and opposed the Mugabe government). That year the Springbok rugby team toured the UK, which gave Meredith’s group some lead time for a campaign to replicate in Australia the very successful opposition to the tour which anti-apartheid groups in the UK had organised. The longer plan was to have the 1971 South African cricket tour called off (which they achieved).

Meredith showed a photo of the front gates of the South African embassy in Canberra, with “Smash Apartheid” spray-painted on the white brickwork on the sides. The embassy painted the words over; but it was re-sprayed, repeatedly.

The group’s first practice run before the arrival of the rugby tour was at Coogee for a “surfing Test”, against a visiting South African surf lifesaving team. We saw a photo of the South African team in their one-piece bathers, marching up the beach, right over the woman lying on the sand protesting. “They didn’t miss a beat.” This event drew 400-500 protesters and got huge coverage in the media. One placard read “If you could see their national sport you might be less keen to see their surfing”.

By the first Springbok rugby game in Sydney, single rugby matches had already been played in Perth and Adelaide, and in Melbourne, where police on horseback had charged at protesters. This caused great anticipation in Sydney, where rugby is taken much more seriously and five games were to be played over the course of a month.

The union movement supported the anti-apartheid movement (Bob Hawke was ACTU President). There were pickets outside the South African airline office, vigils, etc. Airline workers refused to fly the team around the country, and they were forced to charter private planes. Trains wouldn’t take them. The team was refused service in hotels where they stayed; one hotel went out of business when the Liquor & Allied Trades union kept up the boycott after the team had left.

There was a great deal of moral support for the anti-apartheid activists. Churches began to join the movement. Some sports players started to publicly oppose the South African tours, including seven Wallaby players. In particular, two retired Wallabies campaigned against the tour, Anthony Abrahams and Jim Boyce. The seven Wallabies were invited to a celebration “Heroes’Dinner” thirty years later in 2001, and all of them gave terrific speeches, unfortunately unrecorded.

Donald Bradman was another public figure who eventually was persuaded to oppose the apartheid policy. Meredith had a series of letters from him at the time; it was evidently a matter he felt strongly about. Bradman was the chairman of the Cricket Board, which later in the year cancelled the South African cricket tour. Bradman is quoted as saying: ‘We will not play them until they choose a team on a non-racial basis”.

ASIO thought the protesters were Communists and were intensely interested in anti-apartheid activities. Many of the photos Meredith showed were from their files, individuals identified with numbers.

Young Aboriginal activists – including the Bellears, Gary Foley, Norman Ingram – gave support to the anti-apartheid movement, including sharing their house with organisers; but they asked why Australians who opposed apartheid had not been active against the home-grown racism Aboriginal people experienced at every turn. Jim Boyce gave three Springbok jerseys, which he had got in South Africa, to Gary Foley, Billy Craigie and his sister Lyn Thompson (visibly pregnant in the photo), who put them on and lined up out the front of the Bondi hotel where the team were staying. This really annoyed the team as well as Vorster, the South African prime minister, who had said that a black man would never wear a Springbok jersey. [We are reminded of Nelson Mandela putting on a Springbok jersey in 1995 at the Rugby World Cup final; a brilliant move of reconciliation.]

At the first Springbok match in Sydney there were an estimated 20,000 demonstrators. Meredith says that everyone she knows claims to have been there. It was like a war zone, with barbed wire and a huge police presence. She went into the Members’ area dressed, as she thought, like an Afrikaaner supporter, with a wig on to disguise her face, by then well known; and after the police kindly made way in front of her (so she could watch the play), she and her sister Verity jumped over the fence onto the field. Verity even managed to get hold of the ball, and kicked it: “the best kick of the season”, the Bulletin thought.

Meredith came to Canberra for a subsequent game at the Manuka oval. She was keen not to be arrested. Slow justice in the court process was one way the conservative government took opponents out of action. But Aboriginal activists Gary Williams and Gary Foley had cut the wire fence (as she later found out from one of them!), Meredith was arrested for it, and was even found guilty. This radicalised Meredith’s mother, who saw the police lying in court and was shocked.

The Springbok tour campaign was part of a huge sporting boycott movement dating back to the 1950s. In 1976, the Gleneagles agreement banned sport between South Africa and Commonwealth countries. By 1981 New Zealand was the only country prepared to play South Africa; it was New Zealand’s intransigence on this which had resulted in the boycott by African countries of the 1976 Olympic Games.

Along with trade boycotts, sporting boycotts helped to break the morale of whites in South Africa. In 1994 the country won a democratic system with Nelson Mandela as president. This was described at the time as a home-grown victory, with little acknowledgement of the help from bordering states and internationally. But in fact anti-apartheid had been the great humanitarian struggle of the 20th century. Anti-apartheid groups were all over the globe. Vietnam, another epic cause, was taken up only by those countries which had troops fighting there. History-telling in South Africa has now embraced the global involvement in the downfall of the apartheid regime, and some of the same photos and stories Meredith brought are now on display there.

There is a nice photo of Meredith with Nelson Mandela in Glebe, taken during his 2000 visit.

Meredith thinks that the success of the Australian campaign was helped by its specific goal of disrupting the Springbok tour, and owed a lot to the work done alerting people in the couple of years in the lead-up to the tour. They were a main organising force of about twenty people who liaised with unions, community and church groups.

Among questions after Meredith’s talk, there was a comparison of the anti-apartheid movement in Australia and the US, where a major issue was divestment from South Africa. Meredith noted that it was not an issue here because after 1972 the ALP government moved to impose sanctions on trade with South Africa. Jane remembered that staff in shops which still had South African products for sale blacked out the country of origin on the packet. Meredith said that activists put stickers on tins of tuna etc., “Made with black blood”.

Meredith had brought books for sale and display:

Larry Writer, Pitched Battle: in the frontline of the 1971 Springbok tour of Australia, Scribe, 2016