Canberrans were up early on a cold morning last week to support David McBride who had an appearance at the ACT Supreme Court. 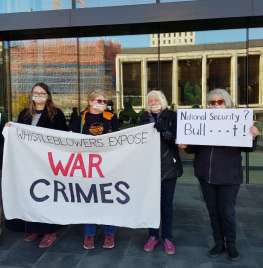 McBride faced charges dating back to 2017 for providing classified documents to ABC journalists, who used them to run “The Afghan Files”, a series of stories alleging war crimes committed by Australian soldiers.

There has been alarm at raids by Australian Federal police on the ABC, along with reports that the AFP had requested a journalist’s travel records from Qantas, and an earlier AFP request for two journalists’ fingerprints. Concern about an erosion of Australian press freedom was expressed most recently at the Global Conference on Press Freedom in London.

Vintage Reds were among supporters who taped over their mouths to protest against the government’s heavy-handed attacks on press freedom. UnionsACT’s Alex White spoke at another gathering for David McBride at a court appearance earlier in the month.