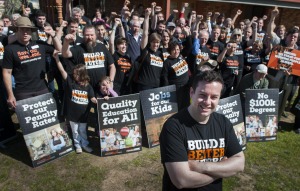 As part of the ACTU’s marginal seats campaign, Saturday’s doorknock around Queanbeyan went off well, the Canberra Times‘s Clare Colley reporting that sixty people had showed up on a beautiful day to put on their “Build a Better Future” T-shirts and get to work.

Vintage Reds member Albert White, who lives in Queanbeyan, was quoted in the article; his well chosen words as reported below: 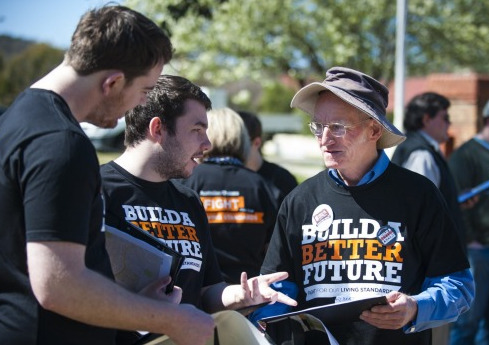 … … Retired Queanbeyan registered nurse Albert White said he had “absolutely depended” on penalty rates to give him a “half decent” wage during his working life.

“I can empathise with all the people in even lower paid positions whose very existence depends on a reasonable wage,” he said. “I’m really concerned about the policies the present government is putting into place to try and undercut the wages with the lie that it will create more jobs and cause more people to be employed.”

“I’m hopeful our action today might make the politicians on both sides aware of our concerns.”

Albert White said he believed threats to penalty rates were a ploy to increase profits for businesses.

“It’s not aimed in any way at bettering the life of ordinary people,” he said. “What the government is not looking at is the reduced ability of people to purchase basic necessities if their wages are cut.”

“The poor and the less well-off are being caught in a pincer movement, their wages are being cut and the public services there to help even out the situation are being cut as well.”