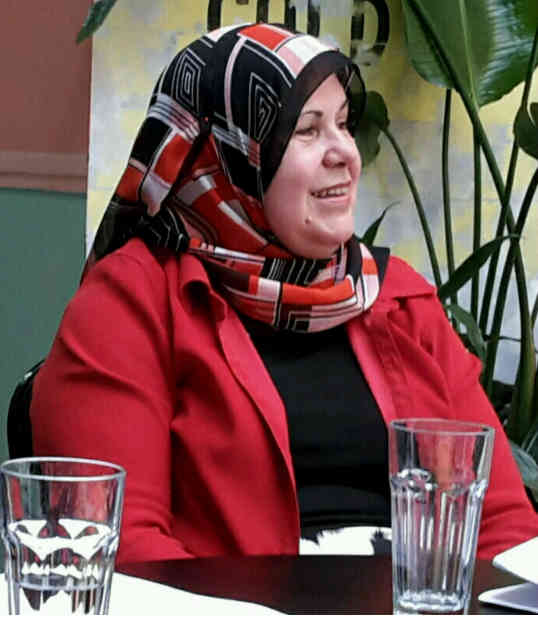 Diana Abdul-Rahman OAM treated us to a very welcome and clarifying exposition on Islam. Diana is a Sunni Muslim, like the vast majority of Muslims worldwide (85% to 90%).   [Photo: Jude Dodd]

The word Islam is connected to “salaam“, peace; it implies submission to the will of God. Islam, like Judaism and Christianity, recognises Abraham as its first prophet. Jesus (“peace be upon him”) is also seen as a prophet, like Mohamed. There is a whole chapter in the Koran called “Mariam” (“peace be upon her”), the mother of Jesus. Islam and Christianity share some expressions, such as “thanks be to god”. Islam is not named for a prophet, unlike Christianity and Buddhism.

The English word “religion” doesn’t translate well into Arabic; the approximate equivalent, “deen“, means “way of life” [ed. note: “religion” in English has no agreed etymology and the various explanations do not converge on a single theme. Current usage, though, relates to worship of the sacred].

The 5 pillars of [Sunni] Islam: 1) shahada, faith. There is only one god, and Mohamed is his prophet. 2) prayers 5 times a day: pre-dawn, mid-day; mid-afternoon; almost sunset; and mid-evening. An emphasis on cleanliness. 3) zakat, a requirement of 2.5% of one’s income per annum to be given to the poor. 4) the Ramadan fast, a moving event, which this year starts on 28 May. 5) an encouragement to make the Haj pilgrimage to Mecca, “the house Abraham built”.

Belief. There is no compulsion to believe. Toleration is called for.

piritual law”, the same word used also in the Arabic world for Christian spiritual law. It applies in the context of where you are living. If you don’t like the local laws, you leave.

War. You have the right to defend yourself. If there is an option for peace, use it. The word “jihad” means struggle.

Women. They keep their name; have the right to education, to own property, to work for money, to express their opinion, to all they need in marriage; no requirement to be available for sexual relations; a dowry is for the bride herself.

But cultural things come into play, making differences. Patriarchy has brought some of these, including a diminished status for women.

Muslims are better educated than the average Australian, in terms of spending more years in schooling.