In this prescient novel the characters feel eerily familiar, despite the book being written over seventy years ago. In particular, the analysis of the sexual politics between the older powerful men and the young women feels horribly contemporary. We are taken to the heart of a class of floating 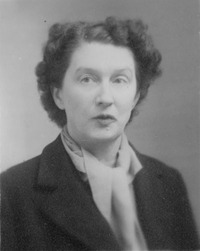 racketeers and crooks as they wait like vultures for America to enter World War 2. As the main character Robert Grant explains …’going to be fifty years of capitalism here, want to go and see a new world coming out of the old world. A chance to construct a new world and  remake your life-how do you like that? Let’s go to a cabaret’. When active war in the Pacific begins, so do black market days. Among other shady deals, Grant acquires properties at rock bottom prices from desperate sellers fleeing for their lives; a manor house in England, a farm in Bordeaux and another in Normandy, properties in Germany and Dublin, a brown stone in New York and a house in Rome.          (Photo: National Library of Australia)

Set in New York in the mid-1940s, the ultra-wealthy Grant is at the apex of his own group of hangers on, desperate women and employees. Nominally a cotton dealer, he chisels, blackmails and deceives daily, but in sentimental fits of delusion, he sees himself as a good man and a victim. He believes that he is a socialist, although ‘must a socialist turn out his pockets and say, “rob me”? No sir. Must socialist mean nitwit?’ As a megalomaniac, he is obsessed with having a play written about his search for the perfect woman, to be called The Girl I Want.

To Grant, life itself is a war as he outwits those around him to get his percentage. His attitude towards women parallels his attitude to business. He says ‘the debts of society are scaled so high, only men can pay. Ha-ha!’

After using and abusing a string of younger women who to him have only their sex appeal to barter with, Grant meets his match, a woman called Barbara, who he refers to as the Blondine. He believes that she – promiscuous, dishonest and petty – is his soul mate. She is just like him and she will complete him. Grant’s explains his relationship with Barbara as ‘like a war map, with front lines and strategic retreats and lines of communications and hidden depots, spies and forces’.

The two conduct a passionate but calculated affair with both sides playing hard and dirty. Grant however loses interest and breaks it off when he has her submission. She retaliates by leaving and marrying another man, before leaving that man and conducting a string of affairs. Grant then pursues her around the country and has her spied on. He spends a fortune to win her back. Eventually, he becomes entangled in the Blondine’s divorce as a co-respondent. Barbara defiantly explains that she lives on the same terms as Grant.

Stead develops this world mostly by letting the characters speak for themselves as they rush through their days. Grant stamps his feet, yells and bullies his way round New York, with pauses to sweet talk and seduce the women who circle his honeypot. He is as mysterious as Jay Gatsby but highly animated and at the front of the action. In a Trumpian moment, Grant claims that he doesn’t need to analyse anything, he knows it already.

It is chilling to see the effects of the actions of the wealthy, game playing and immoral characters on their underlings. People commit suicide, some are completely ruined. Grant is prepared to allow his old favourite Laura to die in order to secure a property title. Miss Robins, Grant’s long-suffering secretary who does most of his work, says to Grant’s son, Gilbert, ‘It is time you knew your father; you don’t know how he made your money or how he wastes it. It’s a shame how he wastes what we work so hard to make.’

Christina Stead, an Australian writer who was living in New York at the time of writing, is still well known for her early novels The Man who Loved Children and For Love Alone, both partly set in Australia. She deserves more attention for her incisive, politically charged later work. The forensic observation in this novel is astounding as is the quality of the writing.

Does Grant get his just deserts in the end? Stead tell us that people like Grant usually don’t get what they deserve. However, thanks to Barbara, he almost does.

NB  If you are looking for books or other texts that are rare or out of print, try the non-profit Internet Archive, www.archive.org. This is a collection of millions of free books, movies, software, music and more.