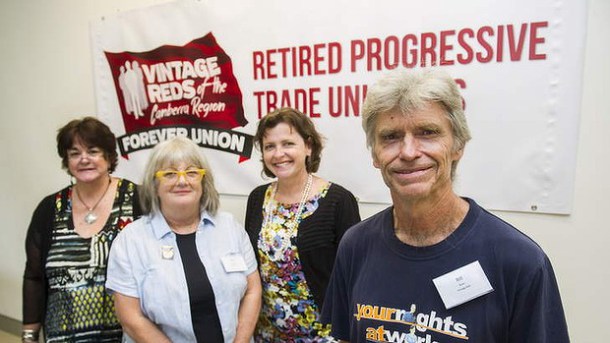 Their days as union firebrands might be long behind them, but a group of Canberra’s retired workplace activists reckons the flames never really go out.

Hundreds of retired union members from around the capital are answering the call to arms from Vintage Reds, a new group set up to try to unleash the untapped grey potential of the Australian union movement.

With a royal commission, commissions of audit and corruption scandals providing perhaps the most challenging environment for organised labour in Australia for generations, the movement needs its elders like never before.

So a little star power was recruited for Friday’s launch of the group at Unions ACT Headquarters in Mitchell, with ACTU national president Ged Kearney drafted to gee-up the troops.

“These are people who are still dedicated to the union movement, but are no longer in the workforce, and just because you no longer have a job, it doesn’t mean that you can’t be an activist,” Ms Kearney said. “This is about how we can keep those retired workers active in the union movement and really making sure they’re out there helping unions achieve what they need to achieve, and that’s a better life.”

Ms Kearney said the ACTU was in good shape to meet its present challenges.

“The work that we do impacts every single worker in this country whether it’s minimum wages, occupational health and safety or superannuation. But we need to make sure that all sections of the community are represented and that’s truly what we want, having retired fabulous unionists involved in the fight.”

“Retirement should not be entering God’s waiting room, or becoming unpaid carers of the beloved grandchildren,” Ms Timbrell said. “We have a lot to contribute and we also have a very strong social conscience and we would like to give back to the community. We want to remind society of why we had such good working lives.”