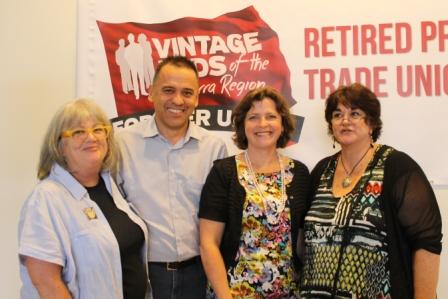 Vintage Reds, a new network of retired progressive unionists in the Canberra region was officially launched by ACTU President Ged Kearney at the Unions ACT offices in Mitchell on 15-2-14. In the photo at the launch I am with Jane Timbrell, one of the founders of Vintage Reds, Ged Kearney and Kim Sattler, Unions ACT Secretary.

Vintage Reds gives older unionists a chance to socialise, support each other and continue to be involved in campaigning using the skills acquired over a lifetime.

Ged Kearney praised Vintage Reds and said they can play an important role in supporting the struggles for workers’ rights especially when the union movement and retirees are under sustained pressure from the new federal government.